Changing the Chicken Law, So I Can Raise My Own Chickens in the Suburbs

I am trying to "Legally" raise chickens (hens) in West Warwick, RI so that I can have fresh eggs. 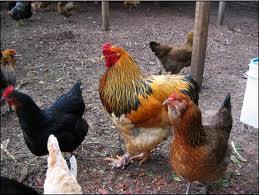 I contacted the West Warwick Town Council, through a friend of mine, but he was informed that it was illegal to raise chickens in West Warwick, I felt it was my duty to try and change the West Warwick law.  Seeing as though many large cities and small towns have already done the same.  In fact the following article was just pubished by

First thing I did was to send the following email to the Town Manager and each of the Town Council Members.


I hope this email finds you well.

I am a resident of our beloved town of West Warwick, I am also a chef, a foodie and a locavore who strongly believes in acting locally and thinking globally. I do my best to raise my own vegetable during the summer months, buying produce items during the non-growing months from farmers markets, and I buy my meats from local Rhode Island farmers.

I recently decided I wanted to raise a few chickens (no more than 3 hens) for the purposes of having fresh eggs, eggs that are not from chickens that have been fed steroids and pumped with antibiotics. But before I invested in buying the chickens and the chicken coop I wanted to make sure it was allowed, unfortunately yesterday I found out through my friends the Paliotta family that it is against the West Warwick zoning laws and or charter to raise chickens for eggs.


I am curious as to the reason for the ban? As I am sure many of you know many cities and towns in the United States permit their residents to raise chickens for the purposes of having fresh eggs, including Providence.

What would be the process to change the zoning or ordinance to raise chickens?


I thank you for your time and look forward to your response.

I quickly received from Mark Bourget, my town council representative stating that he would look into the matter.  A few days later Mr. Bourget informed me of the following:


This is the problem here in West Warwick and I am sure in other places as well. As you can see from the e-mail below there is a conflict between the zoning codes and the ordinance. I am going to have this placed on the next council agenda and see if the ordinance can be modified. In my opinion, if a person wants to raise chickens so they can have their own fresh eggs that is their choice and should not be obstructed. I will keep you informed.

Since that time Mr. Bourget has worked with the other council members to get a feel for the climate of acceptance from he fellow council members and the solicitor this is the email I received today.


One council member is uncomfortable with it as well as the solicitor. The zoning lawyer also has some concerns that he is going to mention Tuesday. This is listed as a first reading so if you cannot attend I can fill you in. There will be a second reading later in the month to finalize the ordinance.

I did just talk to the zoning lawyer his main concern is chickens being raised in certain areas of town that would not be appropriate, like very small yards with close neighbors.

So now I am pulling together resources that I have found while doing some research so that I can be prepared at this meeting.  Luckily I also have Chef John Engelhorn, a fellow West Warwick resident who is Pro Chicken Raising to help me and attend the Town Council Meeting as well.

I will keep you posted, but below you will find some of the great resources I have so far.

Until I blog again:  Eat Well, Life Life and Be Safe  and go raise some chickens,,,,

Posted by #FacultyFriday at 3:31 PM