A Locavore Approach to: The Christmas Tradition of Seven Fishes

A Locavore Approach to: The Christmas Tradition of Seven Fishes

This post follows-up of my previous Blog Post: FOUR FISH- The Future of The Last Wild Food

I live in Rhode Island, a state that that has one of the highest populations of persons of Italian descent. Many Italians (or "I" talians ask my grandfather used to say) celebrate the tradition of the Feast of the Seven Fishes on La Vigilia (Christmas Eve) where  course after course of fish and seafood are served often as many as 7 to 10 dishes. 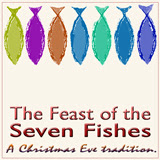 Every family have their favorites and their own recipes but here are some of the more popular  and traditional dishes:
In the above menu items, there are several fish/seafood items that over the years have been over fished and are teetering on possible extinction, I would ask that during this holiday season, you look for fish/seafood items that are sustainable. 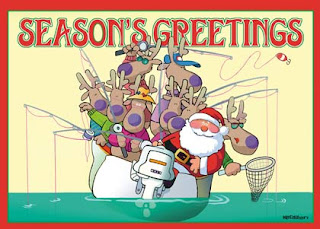 For Fish & Seafood Recommendations, please use the following guide from SEAFOOD WATCH via Monterey Bay Aquarium

Enjoy the Feast of the Seven Fishes, responsibly and have a Merry Christmas

Until I Blog Again: Eat Well, Live Life and Be Safe...

Below is a recommended read, and previous blog post.  FOUR FISH- The Future of The Last Wild Food- Book Review.


The following posting is a review and my thoughts after reading FOUR FISH- The Future of The Last Wild Food by Paul Greenberg. 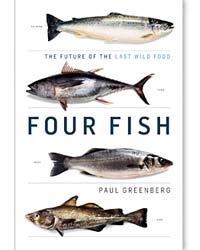 FOUR FISH starts out in a time where children went outside to play from early morning until they knew they had to be home from dinner. An age before computers, video games and the Internet boys spent their days exploring their outdoor surroundings. In the case of Paul Greenberg he explored the rivers around his Greenwich Connecticut home where he got "hooked" on fishing. As he grew older he left the rivers and streams and headed out in his small boat into the ocean around Long Island Sound. The book then explaining how man has altered the amount and the species of fish we know today starting with overfishing, on to building dams and the environmental destruction. Farm raised fish may be a sustainable answer, if we are unable to restore the natural habitat of these fish, but perhaps at what cost?

The book is then broken into four basic chapters:
﻿
SALMON once bountiful species and source of food for indigenous people in the cooler parts of the world has declined almost to extension and outright native species extinction in many areas of the world. The causes are many, overfishing as salmon became available to every fish case in every supermarket, building dams on rivers, river and environmental contamination are a few of the main causes.

Introduce mankind into the solution of saving salmon and the first thing he does is create a domesticated salmon. A salmon that like cattle, sheep, pigs etc that is genetically altered and domesticated to get big fast, the problem with that is that these "farm raised" fish loose many of their natural god given characteristics to survive and the premise that only the strong survive and bread is gone. They also tend to have higher levels of toxic chemicals and promote disease among both the farm and domesticated populations, as millions of these domesticated salmon escape into the wild.

Today we are left with wild salmon fighting to stay on this earth, farm raised salmon factories trying to become more natural and sustainable without a large footprint while maintaining their profits.


PACIFIC SALMON- available for purchase wild (mostly from Alaska), but in danger. 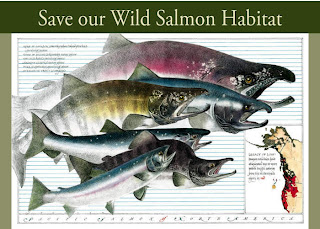 BASS once a fish served only at holidays, thus know as the "Holiday Fish" has grown in popularity in recent years, not because it is thriving in the wild, but because it has been successfully farm raised in the Europe Union (France, Italy, Greece, with an influence from Israel). The fish was developed to be farm raised to help reduce the worlds shortage of food for underdeveloped nations. Instead the Patagonian Toothfish or better know as the Chilean Sea Bass is so popular and the demand is so high, many many producing farms have developed, thus reducing the cost and putting many farms on the brink of bankruptcy. 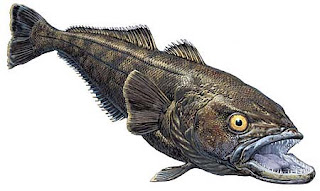 BARRAMUNDI- perhaps to be know someday as he Asian Sea Bass 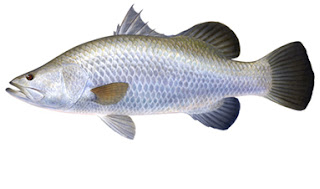 COD or "fish" to many was once the commoners fish, the fish eaten weekly in many homes because of its relative low cost, its non-fishy taste and its flaky texture. The forms of cod varied from fresh to frozen fish sticks to the McDonald "fillet of fish". The plight of cod has been well documented fisherman going further and further in the Georgia Banks to find fewer and fewer and smaller and smaller fish. The government got involved and closed parts of Georgia Banks and there are some signs of the population slowly rebounding. Several companies have tried to farm raise cod, but the product is typically inferior. So what is a world to do with the amount of cod available on the decline and the demand for a white, flaky, fish-less tasting product? Enter Pollock a fish that seemed the perfect substitute, enter the overfishing of pollack, we are back in the same place, less fish for a growing demand. Then in Vietnam Tra a filter feeding fish was promoted as an suitable substitute for cod, but Tra doesn't have the mouth feel of cod, is oilier and has a more fishy flavor. thus Tra didn't really catch on. Finally we have what we are still somewhat substituting for cod. Tilapia, Tilapia is a non-fish flavored fish, relatively inexpensive the reproduces and grows fast. Tilapia is a fresh water fish that is very adaptable to environmental changes, in fact in some parts of the world it is looked at as an invasive fish, taking over fresh water areas. 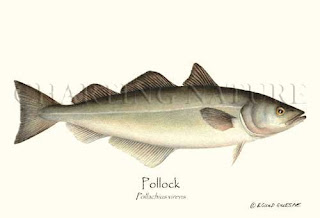 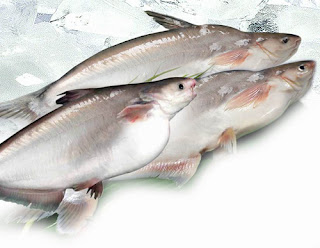 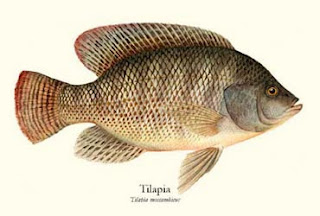 TUNA , specifically bluefin tuna is perhaps on the verge of non-existence on planet earth, over fishing and the reduction of the breeding stock has caused the bluefin to become one of the rarest and most expensive fish on earth. In fact in Japan many years ago bluefin tuna was not even considered for sushi or even consumption because of its fatty texture and fishy flavor. Not until the United States occupied Japan for seven years after WWII and introduced American beef, did Japan acquire a taste for fatty textured foods. Now Japan is one of the worlds, if not the worlds biggest consumer of bluefin tuna.

In this tuna chapter the subject of how we humans categorized some creatures as food and others as wild life that should not be hunted or consumed is discussed. For example how whales, dolphins, wolves etc are considered sacred and untouchable. The factors of why we don't or shouldn't eat certain animals is based somewhat on if they are endangered or not, but mostly on a publicity campaign. Take for example the swordfish, several years ago a campaign was geared mostly towards chefs, but to the general public as well to not buy, sale, or eat swordfish. The campaign basically worked and the swordfish populations that were once at around 10% of their largest know population are back to about 95% of their largest know population. That is until we fell back into our old ways of overfishing, the swordfish population is slowly falling back in numbers. Whales on the other hand have had a long history of trying to be saved, and for most countries whales are not on the menu anywhere, but not all countries, countries such as Norway and various Asian countries hold whales to a higher standard. Because whales are such a large mammals their numbers in nature are going to naturally be less than animal that are much smaller in numbers and consume less raw product to survive.

Enter Kona Kampachi perhaps a viable replacement for bluefish tuna. Kona Kampachi has shown a great ability to be farm raised in the ocean, reproduce quickly and require little raw material to grow. Marketing and consumer awareness of this fish will ultimately determine if Kona Kampachi replaces the consumer demand for the culinary niche currently held by bluefish tuna. 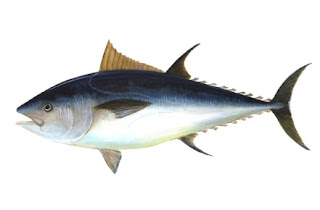 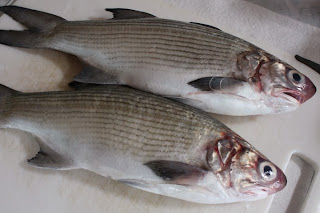 I enjoyed this book greatly, it was hard to put down at times and I never got to a point in the book where I got bored or wanted to skip ahead. It is somewhat if not plain out easier to eat local when it comes to land based food that is grown in front of us, a place we can see, touch, smell and visit. Fish on the other hand, are not easily visited by most, we cant see schools of fish while driving in a car or while on vacation the fish used to feed the human race on a grand scale is not visible. For the most part we have not domesticated and dwindled down the gene pool of fish as we have beef, pork, chicken, lamb, goat and turkeys. The ocean is still the "wild" frontier for good or for bad the fact that the ocean is still wild means that when humans take, we sometimes don't know when we have taken to much.

As quoted in the book, "Do no harm," the Buddha spoke, "practice restraint according to the fundamental precepts. be moderate in eating...."

Finally, it is unfortunate, but a fact that individuals can not save the fish populations and the oceans. It will take much bigger steps as the the author suggest to help wild fish and our oceans.

Until I blog again: Eat well, Live Life and Be Safe...
Posted by #FacultyFriday at 10:29 AM

Email ThisBlogThis!Share to TwitterShare to FacebookShare to Pinterest
Labels: Christmas in New England, FOUR FISH- The Future of The Last Wild Food, The Feast of the Seven Fishes