The journey began on an autumnal Sunday afternoon in early November at the Providence Amtrak station on my way to New York City and the New York Produce Show and Conference.
As the train departed Providence heading south to New York City most of the normally vibrant New England autumn leaves either were already off the trees or were a dull brown. 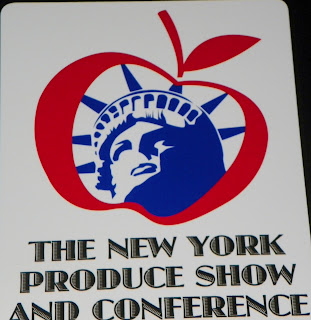 The New York Produce Show and Conference was held at the NYC Hilton in Manhattan.  There were around 3500 attendees on the exhibit floor during the day.

I had the pleasure of bringing four talented JWU seniors from theCulinary Food Service Management Program with me to the show (on the left).  As well Chef John Abels from Le Cordon Bleu in Chicago also brought four students with him as well. 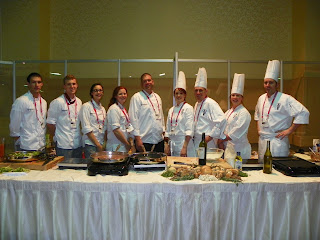 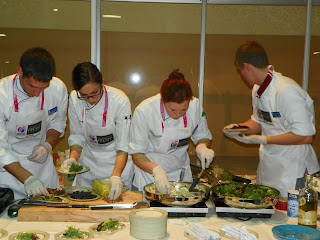 Our mission to work the "Culinary Innovation Station" on the conference floor as well as to assist the "Celebrity Chef's" during their demonstrations. The celebrity chefs included Sarah Molten, The Lee Brothers, Charles Oakley (yes the former MBA player). 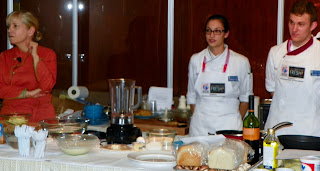 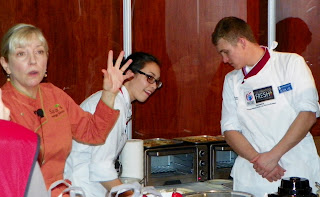 The premise of the "Culinary Innovation Station" was to send the students out on to the trade show floor and to have them "Forage" for the fresh product that we would use  to cook and produce samples for the trade show participants. 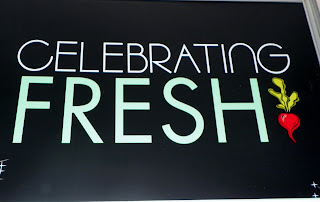 We got off to a rocky start as the induction pans we were given did not work on the induction burners provided, so we only had an electric grill and a toaster oven to use.  Did this stop us, most certainly not.  As I told the students, pretend you are a culinary MacGyver, and so we did, and I must say the students were very creative and productive while foraging. Unfortunately we were so busy I didn't have enough time to take a picture of all of our dishes, but the two below are Organic Medley of Squash with Fresh Raspberries, Micro Basil and Bacon and Dueling Fruits.  We also had a Country Apple Salad, Trio of Mushrooms with Fresh Herbs and Sherry, Braised Portobello Mushrooms with Wilted Greens and Fruit and several others.  (dont ask me where the bacon came from, its a produce show, it just seemed to appear, the pork gods were good to us on this day) 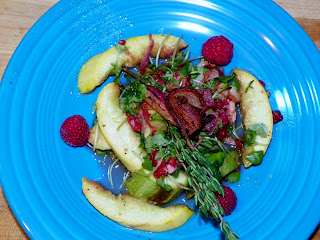 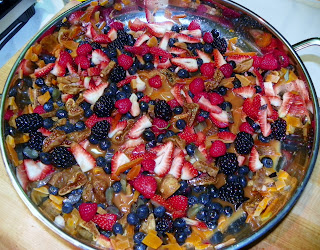 Until I Blog Again, Be Safe, Eat Well, and Enjoy Life. 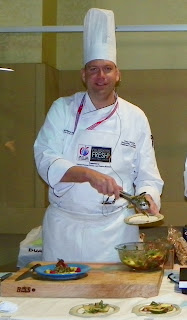 Posted by #FacultyFriday at 7:00 PM