Happy Thanksgiving, in this post I would like to give thanks to the many small farmers who give chefs, cooks and foodies the chance to buy all natural farm raised meats and produce throughout Rhode Island and throughout the United States.

If you have followed my blog you will recognize the name Locust Leaf Farm, so far I have purchased a 1/4 cow from them, a side of lamb as well as eggs and other miscellaneous items.  Check out my original Locust Leaf post here

Today I purchased a Farm Raised Turkey for Thanksgiving from Locust Leaf Farm, the farm gets the birds in June when they are only a few weeks old and then raise them on the farm in very large open air coops.  While in the coops the turkeys are given unlimited all natural fresh food (including treats of vegetables and grasses) and water.  Thus the turkeys are able to walk, jog and play turkey games throughout the day. Unlike the mass produced turkey farm turkeys you buy in the supermarket (see below) 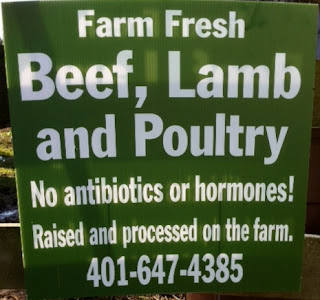 Locust Leaf Farm raised and sold 40 turkeys in 2010 and  this year they have already sold 50 birds before January 1st . Because of the consumer demand they decided to expand and raise 75 birds for this Thanksgiving.

Locust Leaf Farm processes their own birds right on the farm, and they also process for other local farmers.  They do this as a family, with the help of 2 other trusted individuals.  This year they are estimating that they will process between 400 and 500 birds the week leading up to the Sunday before Thanksgiving.. 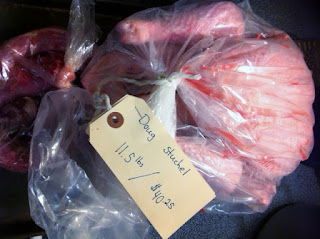 The farm even raised a few heritage breed birds this year, the Blue Slate Tom Turkey. The heritage birds were hatched by the farmers daughters and  preschoolers.  A picture of the Blue Slate Turkey that was taken at the farm a is below: 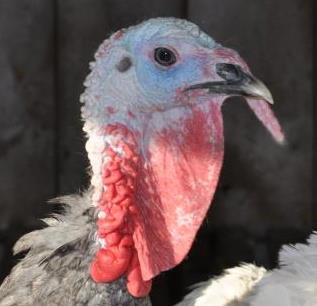 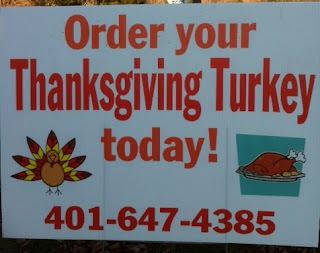 This is unlike the mass produced turkeys you buy in the store:

The Secrets Behind Mass Turkey Production
via the Business Pundit 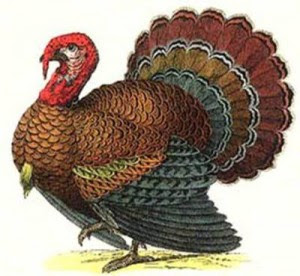 Slate has an informative ditty about how turkey suppliers meet huge Thanksgiving demand, which amounts to roughly 46 million turkeys during a single week. Suppliers must plan a year ahead:
Market leader Butterball…has already begun the production cycle for next year’s holiday season. Eggs for breeder birds have been purchased from one of the world’s two major genetic suppliers, Hybrid and Nicholas. Those eggs will then be hatched and placed in turkey farms so that they can grow and become sexually mature during the winter. Come springtime, these birds will produce the eggs that are destined to become the turkeys we actually eat.
The eggs laid next spring will be incubated for 28 days and then, after they hatch, the resulting turkeys will spend about 10 to 18 weeks on a farm before they’re brought into the processing plant in late October and November. The birds are slaughtered, quickly chilled…then shipped out to retailers, usually all in the same day.

The article adds that turkeys need to be bred with human help:
The vast majority of turkeys sold in the United States…have been bred to produce as much white breast meat as possible, resulting in males so large and unwieldy that they can’t properly mount the females. Toms therefore have to be manually stimulated and “milked” for their semen, which is then inserted into a hen using a syringe.
And that, folks, explains how your roasted bird made it from farm to table. Not a pretty process!
Article printed from Business Pundit: http://www.businesspundit.com.


You choose what method you prefer, you already know mine, and for that I give thanks to all the small farmers
HAPPY THANKSGIVING

Until I blog again- Live Life, Eat Well and Be Safe...gobble gobble gobble﻿
Posted by #FacultyFriday at 9:00 AM