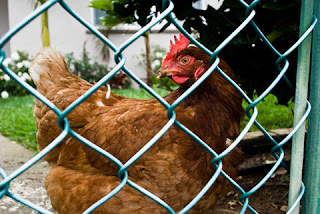 Ernest and Linda Lambert, retirees living in a shaded suburban cul-de-sac just off Woonsocket's Mendon Road, have an unusual backyard project.
There, in a series of plywood coop houses, sit more than three dozen chickens — Rhode Island Reds, Guinea Hens, and other pedestrian breeds. And some that are more exotic, like Araucana, known for their turquoise eggs, and Silkies, covered with fluffy plumage to the tips of their toes.
A wire fence surrounds the hen house, but during the day the gate is open and the birds run about the yard. They've scratched small pits into the earth where they sit and rub their feathers in the dust, a behavior said to ward off mites. They also pursue any squirrel that tries to mooch some feed.
Linda collects 10 or 12 eggs a day. "They taste better than the ones you get in a supermarket," she says. "Buy them in a store, and you have no idea how old they are."
As it turns out, breakfast eggs that fresh can be a rarity, in Rhode Island and elsewhere. The Lamberts' flock is tolerated in Woonsocket only because their coop is older than a zoning ordinance that bans farm livestock from the city. Other families in the old mill town have been ordered to bid their birds goodbye. Many communities in America's urbanized areas — yes, the Blue States — have similar laws, adopted in an age when anything that smacked of Old MacDonald was viewed as a dirty, stinky nuisance.
But these days a revolution's brewing. Foodies and locavores across the country are pushing to end local restrictions, and a half dozen websites now advise urbanites on how to raise "pets with benefits." The argument: backyard eggs are cheaper, tastier, and healthier, with higher levels of omega-3 fatty acids. Sustainability is an issue, too. Grow your own and you eliminate the energy consumption and carbon emissions that go with transporting food. What's more, chicken shit is a great fertilizer for your organic garden plot.
In just a few years grassroots activists have overturned ordinances in more than 30 major cities, including Los Angeles, Houston, Ann Arbor, Madison, and Missoula. They've gained ground in the Ocean State, too. Providence, West Warwick, and even snooty Barrington have all revised their laws, allowing residents to keep hens in limited numbers, so long as there are no crowing roosters in their coops. And in Cranston and Warwick, city council members are now reviewing proposed changes.
"It's definitely a national movement, and I think the Internet has a lot to do with it," says Douglas Stuchel, a professional chef who now teaches at the Hospitality College at Johnson & Wales University. "People can research and learn how agriculture has become big business. They know it's not simply about feeding the world."
Stuchel has taken up the banner himself. He's constructing a coop behind his West Warwick home where he plans to keep some Rhode Island Reds. "As a chef, I know the food your raise yourself is better," he says. "Pesticides are one concern, but taste is an issue, too."
Chicken fancier Sam Abram believes snobbery fuels anti-avian sentiments in some Rhode Island suburbs. The real estate manager raised hens while living in New Hampshire and never heard any complaints. Shortly after he moved to Barrington, he built a backyard hen house. A few days later an animal control officer told him it had to go.


He fought back, lobbying town officials to change the law. Today residents are allowed to keep up to six hens, and the town has a dozen coops. Abram says he's won over some neighbors by sharing eggs and letting their kids visit and observe his flock. "I guess some people thought Barrington would be less elite with chickens," he says. "One member of the zoning board told me it would change the character of the town."
The movement has some opposition. Sanitation is a common concern: manure piles can stink, and rats are attracted to food scraps left for hens. Critics also fret some newbie chicken enthusiasts will neglect their animals once the novelty wears off. In a recent Slate article, vegan journalist James McWilliams ridiculed urbanites who raise chickens as naive hipsters looking for a bandwagon to climb aboard. He emphasized the point by posting an audio file of a bleating goat; the animal was dying, sickened after eating something careless left around by a wannabe urban farmer.
Back in Woonsocket, the Lamberts are largely unaware of the national debate. They began raising hens almost two decades ago, when their children were young and there was nothing trendy about homegrown eggs. Today they enjoy their pets chiefly for the entertainment they provide.
"It's a great hobby," Ernest says. "But not in this city. There's a law against it on the books. We happen to be grandfathered."
Read more: http://providence.thephoenix.com/news/147912-urban-chicken-roost-movement-hits-rhode-island/#ixzz2DfHeZHKv
Posted by #FacultyFriday at 7:59 PM